I like to put a front cap on my camera lens when I do not shoot. Over the years, I have noticed that there are three types of caps on my cameras and lenses.

'Push-on' type: made of metal, plastic or rubber. My dad's old Zenit C has a metal one produced in late 1950s or earlier 1960s. In mid 1980s, he brought me my fist slr camera, Yashica Fx-3, from Hong Kong. It has a short-range zoom with a plastic front cap. This type of cap is simple, just a cover without any lock function, but no more common these days. 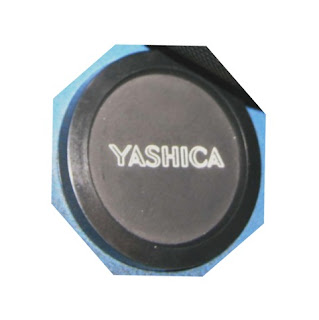 'Center-pinch' snap-on type: a common type today. See the Nikon one in the following image. Do you know why it's common? I believe, when you have a lens hood on your lens/zoom, you will figure out youself. Your fingers can easily reach the center-pinch to put on or take off the cap within a hood. Due to the structure on the caps, they often are thicker than the other two types.

'Clip-on' type: you need to press the two 'buttons' along the outside edge of cap when installing/taking off it. The structure on this type of cap is simpler, so they are thinner. 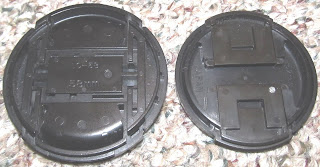 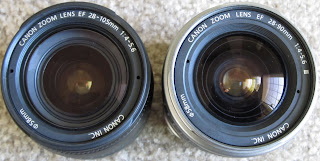 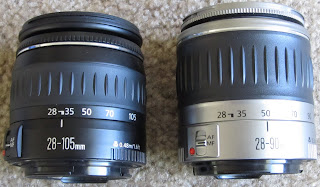 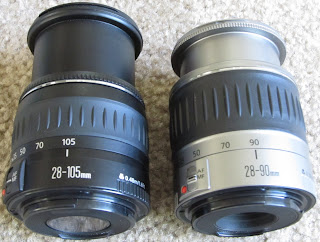 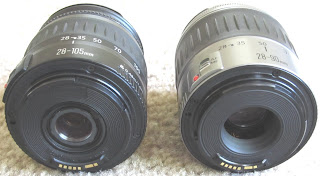 Conclusions: I prefer the 28-105mm zoom. It has 1) a wider zoom range, 2) internal focusing (lens length will not change with focusing), and 3) sealed rear end to avoid dust into the barrels from this end.
Posted by The Chens at 11:06 AM 1 comment:

The Japanese version, alpha 7, was the winner of the 18th Camera Grand Prix in 2001 (and is the last film camera winning the award). As I understand, all versions are the same functionally, except the middle name (Alpha, Dynax, Maxxum; correct me if not). 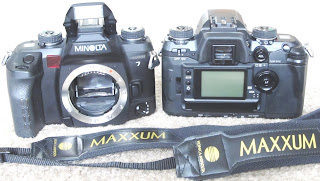 Technically, the 7 is one of the most advanced SLR cameras ever built. It features two LCD screens (the small one on top and big one on film door), 1/8000 s shutter speed, wireless flash control, 14-segment honeycomb-pattern metering system and depth-of-field (when paired with Minolta D-type lenses) displayed on the big LCD. If the 7 is new to you, don’t forget to get a copy of the 203-page instruction manual. 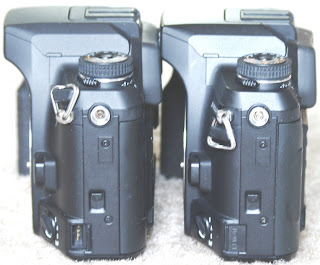 Other features I like include ‘eye stat’, AF/MF switch (no matter which focus mode is set), custom-assigned functions of two control dials, central button for quick selection of center focus point, four flash modes, Japanese-type slide doors of the contacts for remote cord control and batter and control grip, many function controls on the battery grip VC-7 (3 buttons, 2 dials and 2 switches), 35 custom functions (I set Custom 3 to 2 for film leader left out of the cartridge), memory function to store camera settings and to download via the Data Saver DS-100 for 400 – 1900 rolls of film (I have no such saver and no need for the data to keep). 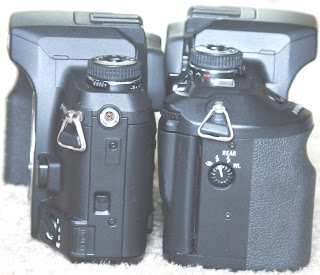 The 7 is well built (8.8 on 10-point scale), but not very solid and durable. My main concern is the film door with the big LCD and many controls. The door surface, I mean the rubber layer, is worn easily and become sticky on some bodies. There is only one latch to lock the door (carefully close the door, you do not want to break it). The film door has a sophistical lock system, which has malfunction in some bodies to block the door to open. Read the manual troubleshooting section to see how to open the door if any malfunction. The grip VC-7 is relatively rear to find and expensive, often a used one is more than USD 100 (vs. 160 – 200 for a used Maxxum 7 body). 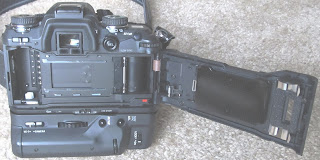 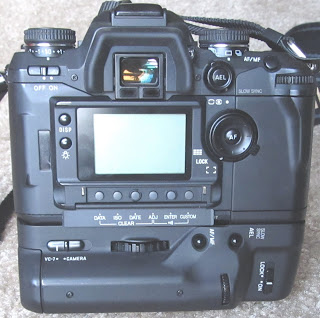 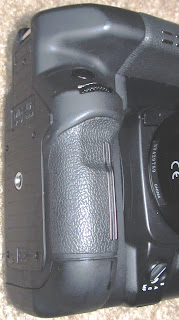 A wireless remote to control the camera? No, sorry.

As far as I know, there are two versions of α 7, regular and golden. What I don't know is if there are any difference except the colors. I guess it's just a matter of marketing.

Want to see more of a Dynax 7, click here.

The following are an article on Maxxum 7 from Pop Photo and Minolta ad for Maxxum 7. 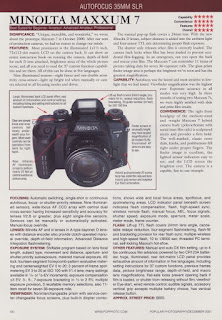 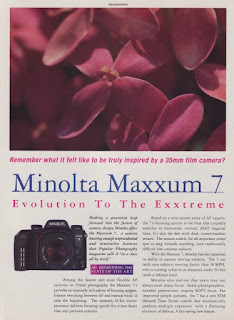 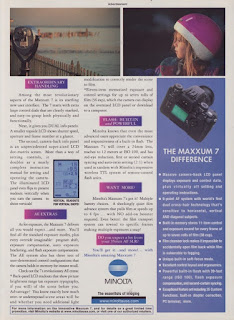 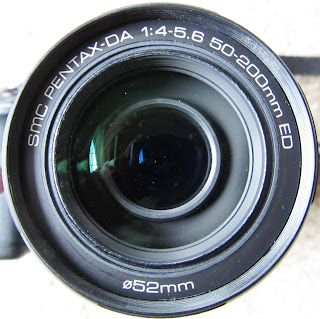 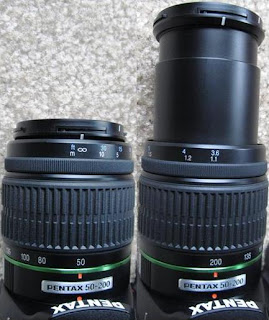 This 50-200 zoom is compact, quick, quite and easy to use. It has the function of quick shift (QS, The lens releases the gear with the focus-driving motor in camera body and allows manual adjustment of focusing once the auto-focusing finishes). The lens surface is also marked both zoom and distance scales, but no magnification scale on the barrel.

With a metal mount, this lens was built of three layers of barrels. The front/most internal one does not turn while focusing. If you buy new, it should come with a hood. I would rate its build quality at 9 on a 10-point scale.

I used it to shoot kids and got satisfied images from my K-x.
Posted by The Chens at 12:04 PM No comments:

Elan 7/7E and 7N/7NE were released in 2000 and 2004, respectively. EOS 7S is the JDM version of Elan 7NE Date. They are midrange bodies in EOS family, with pentaprism viewfinder, 1/4000 s shutter speed, and metal lens and tripod mounts. With many shared parts (such as back film door, eyepiece cup and more), the four models look similar, except finer and smoother texture surfaces of top and front panels on 7/7E than on 7N/7NE (the panels are made of aluminium), sliver color of LCD frame on 7/7e vs. black frame and backlight of LCD on 7N/7NE. On the two top dials of 7N/7NE, marked letters are elevated rather than printed as on 7/7E. Furthermore, under the hood, 7N/7NE have an upgrade AF system and E-TTL flash metering system. 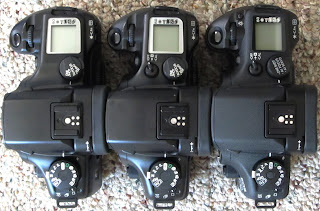 Although AF points increase to 7 in 7/7E and 7N/7NE (vs. 3 in Elan II/IIE and EOS 55), the eye-controlled DOF as in Elan IIE disappeared in 7E and 7NE. The vertical dial on the back door (Quick Control Dial named by Canon) was not passed on to later Canon EOS T2 and EOS DSLR. In stead, some Canon DSLR bodies have a horizontal rear dial like those on Nikon N80, N75 and Minolta Maxxum 7.

Build quality of 7/7E and 7N/7NE are very good. The big eyepiece cup fits well to my glasses and sunglasses. If possible, get a body with the eye-control, which is amazing. By May of 2011, I have not seen any Canon DSLR with the eye control. All models numbered by 7 have both wireless remote and electric cord controls. I prefer them, but other brands such as Nikon N80 still use the traditional screwed-on shutter release cable. 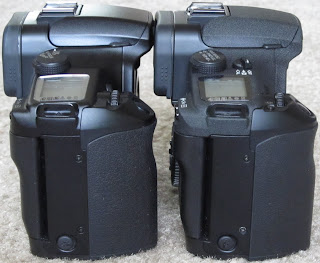 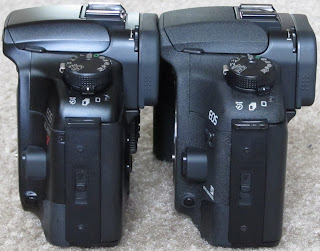 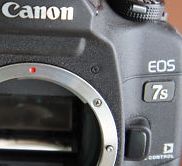 The Japanese version, EOS 7s, has a date back. It's very rare in North America. According to the manual on Canon website, the date versions of 7NE and 30V also exist. I saw a 30V Date on ebay, but have not seen any 7NE Date yet.

If you are looking for a mid-range-price 35mm film camera body, consider/test these Elan 7/7N bodies before you buy.

During 2003 – 2004, the four major camera manufactures, Canon, Minolta, Nikon and Pentax, released their last models of consumer-level SLR cameras. Although at the low end, mainly regarding their prices, they should be the most advanced in term of technology. Many features in these cameras are passed on to the digital SLR bodies. Several of these last-generation film SLR, such as Canon T2 and Pentax *ist, do look like DSLR bodies with big screens on their backs. However, the screens on film SLR cameras do not show any images, and display only camera settings and parameters.

On the internet, there are articles talking about these film SLR cameras. Here, with the four cameras side by side, I emphasize the differences and unique features of them using images and table (highlighted in blue).

In term of body design, I pick Canon T2 because, with my right hand alone, I can reach 11 buttons and dials (except flash and DOF buttons), which may be used during shooting, on the body (see the following image). Probably that's why there is no button/dial on the left-side top. Regarding the build quality, Canon T2 and Nikon N75 should be better among the four. 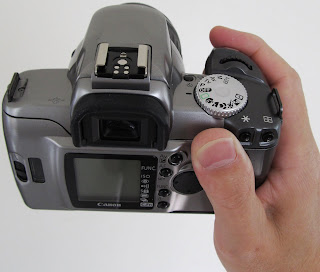 Before picking/buying a SLR camera body, there are many factors to be considered: your personal preference, available lenses, body functions, price, and… There is no the best one for everybody, but the one most suitable for you. 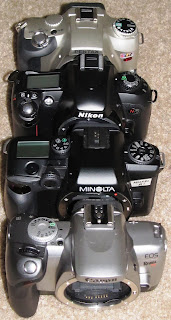 I also have four articles focusing on each of them, Canon T2, Minolta Maxxum 70, Nikon N75 and Pentax *ist.

Write to me if you have any comments and suggestions. Thanks.
Posted by The Chens at 12:55 PM 1 comment: