In earlier 2011, after many years’ use of digital cameras and recent update of my dslr, I thought to take pictures for my two little boys and to leave their images on negatives (read my earlier article on the cost and price of film shooting in 2011). At that time, my two old manual focus slr Yashica cameras were out of reach. So I searched the local Craigslist to look for a used slr. Found a black and date imprint body of N75 with a Nikon 28-80mm G lens at $50. Emailed the seller, a state detective, who told me that he had put them on sale for several months. He brought the kit to my office. I found it is in very good conditions with original package and papers. Via later internet search, I realize this is a good deal because black and imprint version of N75 is rear in the market. If sold online, should be priced higher. 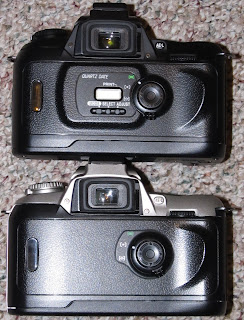 Fig. 1. Front and back of black and black/silver versions of Nikon N75
Released in 2003 as the last customer-level slr from Nikon, N75 was made in and is one of the most advanced compact slr cameras. N75 has two color versions (All black and Black/Silver) and optional date/time imprint on film door. Later I brought a black/silver non-date body  for parts and repair at USD 6.3 plus shipping online, and found out that it woks fine because not many people understand the hi-tech in the body and know how to use it. 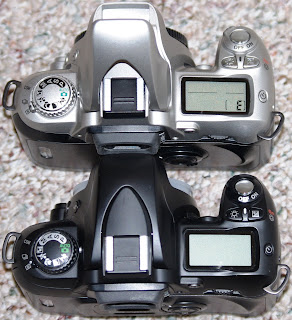 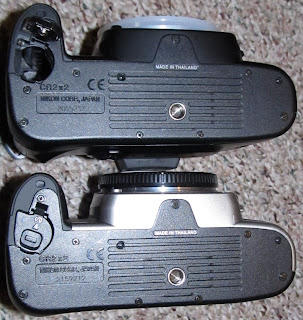 N75 is well designed with a small and traditional-style body without big LCD on film door, which is found on Canon T2, Minolta Maxxum 7 and Pentax *ist, although all of them released several years apart. I rate N75 build quality at 9/10. It has a penta-Dach-mirror type of viewfinder, which needs electric power to make it bright up and to show the 5 focus squares. These squares are selectable and can light up to indicate which point is in focus. Film status and battery level are also indicated in the viewfinder. Film loading in N75 is unique, all film is first winded out of cartridge, the finished frames were returned into cartridge one by one to protect them from accident opening of film door. Shutter speeds among T and 30s – 1/2000 s, single and continuous servo AF, AF-assist light, 3D 25-segment metering, focus and AE locks, depth-of-field button, remote control, multiple exposure (up to 9?), bracketing, continuous shooting (1.5 fps), mid-roll rewind, 2 CR2 batteries for both body and imprint, mental lens mount, optional battery grip (MB-18) are enabled or equipped. There are also 12 settings of custom functions. On the downside, 1/90 s sync speed, no manual film speed setting, no IR film, on-camera control of remote delay (I prefer such setting on the remote as for my Canon Elan 7NE), accidently change of focus mode selector, un-durable latch on film door, no option of leave-out of film leader (as in Minolta Maxxum 7 and 70) should be listed.

It's common to see a small crack on the sidewall of the program knob on N75. The good news is that it does not affect any performance.

Fig. 3. Nikon N75 with film door open
In general, Nikon N75 should be among the tops of the last generation of 35mm film slr cameras by all manufacturers. If you like to see the equivalent cameras from other manufactures, visit my blog page comparing Canon T2, Minolta Maxxum 70, Nikon N75 and Pentax *ist.
Posted by The Chens at 8:49 PM