The User's Review: The price and cost of film photography in 2011

After many years life without using any photo film, I decided to take some film photos for my two little boys, 2 and 3 years old. I want to portrait them on the film with unmatchable resolution by current digital technology, and maybe it’s unique for them since they will have no such or not many chances later in their life.

Kodak does not produce film as much as they did. In 1/2011, I shopped around locally and online, and found the available brands are and some shop’s brands such as Walgreens and CVS. I also found Walmart has the lowest prices for film (even lower than online, but their photo centers have disappeared in the shops) (Fig.), and Sam’s has the cheapest cost to develop and digitalize the film. 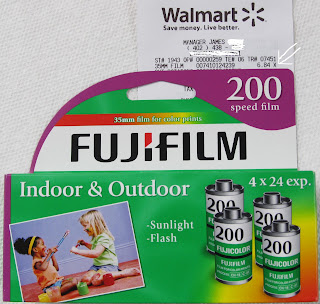 Fig. A pack of 4 rolls of 35mm color print film and its receipt from Walmart

Since my old film cameras are left in , I paid $50 to get a used Nikon last film slr model N75 (very nice) locally via craigslist. These days everybody wants to go digital and few wants or keeps film cameras any more. Many of the last-generation film cameras (produced around 2003 - 2004) use the CR2 or CR123A batteries, which are at a price of ~$10 for a pair in local stores. I brought 4 pcs of CR123A including shipping at $4.99 at meriline.com. The table shows the lowest costs for film photography I have paid recently.

Table. Budget price and cost of film photo in 2011

*See the figure with a receipt for the 4-roll price.
**Varies among cameras. The cost per frame is based on my Canon Elan 7NE, with a pair of CR123A lasting for ~35 rolls of film with 50 flash use, as claimed in the Canon manual.

The table tells us: