I am interested in Pentax Spotmatic because of its TTL metering and birth day in 1964. This year is of historical significance for both first commercially-available TTL in Spotmatic and TTL-AE in Topcon Auto 100 or Uni. 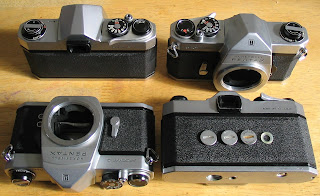 Pentax Spotmatic uses the similar chassis in Pentax S to K series since 1958. Although named Spotmatic, there is no spot metering, instead, an average metering system using CdS cells on board. Pentax SL is a full sibling model without light metering.

A switch marked "SW" locates on the left side of the lens mount when the camera is in hands. By pushed up, the switch turns down the aperture and activates the light meter. Two versions of SW switch are found among Spotmatics. On a body with SN 427xxxxx, the SW switch has no small round window. On other bodies with SN148xxx to 376xxxx, the pushed-up window showing red indicates that the switch is on. This function is not very useful and convenient. I only look through the viewfinder to see where the needle locates, not the window. Maybe it’s the reason why Pentax dropped the window in later-manufactured bodies, or simply, that body has a no-window SW switch of Pentax SL that has no meter installed.

I need to take four steps to check battery status. First, set ASA to 100; Second, set speed to B (or you can set B first and 100 second); Third, push the ‘SW’ switch up; Finally, look into the viewfinder to see if the needle is all the way down. If so, the camera has an ok battery. I could not figure these steps out without reading the PDF manual (Thanks to butkus.org). With four bodies in my hands, I also find 3 versions of battery cover. The battery chamber was made of either metal or plastic.

As the manual says, the self-timer can be set between 90 – 180 degree to adjust its running time. This is good. However, what is not good is the way to release the timer. Press the small button (block by the timer bar when it's not cocked) in stead of the shutter button to start the timer. If you press the shutter button, the shutter will be fired immediately, without running the timer.
With a M42 lens mount, there are many lenses and zooms for my Spotmatics. However, I can not perfectly  line up my Yashica 50mm lens on the Spotmatic bodies after the lens is tightened up.

A ring marked film types and 'Empty' under the rewind knob can be set to remind film chamber status since no window on the film door. This ring may be confusing.

Pentax Spotmatic is one of the most durable metal SLR models. After ~48 years, all 4 of my Spotmatics are mechanically functional with active meters although some look ugly.

Although both were made by Pentex, I did not realize that Honeywell Pentax Spotmatic and Asahi Pentax Spotmatic SP were the same until I held both in my hands. The differences are superficial, including Honeywell vs. Asahi on their forehead, trade mark H vs. AOCO ( Asahi Optical Co.) on their front roofs, and SP engraved under the SN of Asahi spotmatic top plate.