So far, this is the only camera I paid more for shipping than its own price. I bid it online. Its final price was GBP 10.5 plus GBP 12.5 shipping via Royal Mail Airmail. It came from the Lindsey Lodge Hospice shop in Scunthorpe, United Kingdom. Why did I pay more? It’s my way to help and, based on my experience, items from a charity are usually in good conditions. 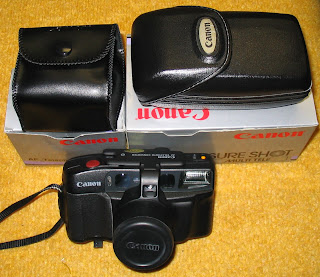 Yes, I got the camera, actually in a kit, better and more than they promised. For this camera, the only extra thing I need is a manual. That’s easy to get. Thanks to Google and M Butkus' website of camera manuals. 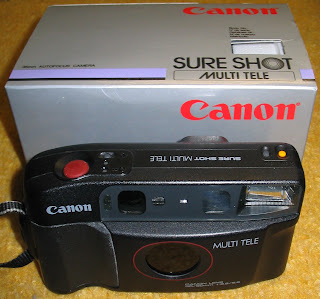 The kit donated to Lindsey and bought by me is not used much. More interesting to me is the rare and matched tele-lens converter. It extends the on-board tele lens from 60/85 to 75/110mm (full/half frame). But on the other hand, it’s impossible to use the wide lens (35/50mm for full/half frame) on board and to power off the camera  when the tele converter is fully installed. To use the wide lens and to power off, the upper hook of the tele converter should be released first. 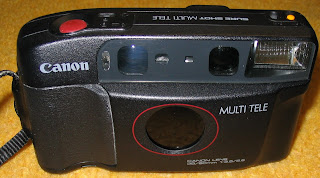 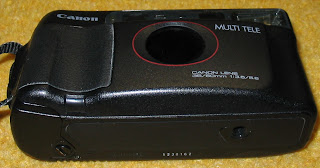 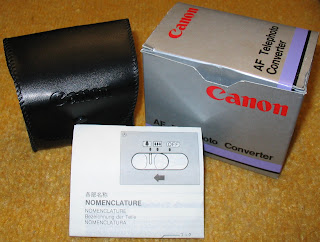 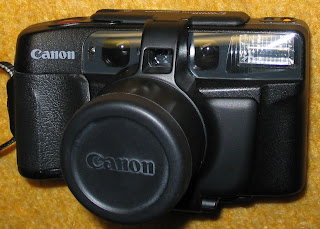 Canon also produced a date version (Multi/Prima Tele Date) with a date imprinting back. It seems to me that there are more control functions on this back although they are not mentioned in the manual that I have. 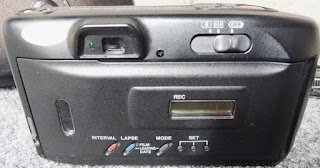 Compared with other Sure Shot models, Multi Tele is not small, and pretty noisy when running, probably because there are more functions coming with the camera. You have to make a decision on full OR half frame before installing film. You can not change between full and half during mid roll since you can not get access to the yellow frame switch inside the back cover. In the case to change between full and half frame in mid roll, you have to use the other camera, Konica Auto-Reflex.
Posted by The Chens at 7:58 PM