Canon (originally named 'Kwanon' after the Buddhist bodhisattva Guan Yin by G. Yoshida, one of the four founders of Canon) developed the  Canon Electro-Optical System (EOS) in Canon's first EOS camera, 650, in 1987. The alternative definition of EOS can be find at the end of this blog.


As a piece of history, EOS 650 is honored as 'the masterpiece of modern simplicity' by the EOS users and followers. 'The EOS 650 marked the beginning of a new era for Canon since this camera is totally unlike any other AF 35mm slr on the market when it made it debut in 1987.' The EOS 650 represented a revolutionary approach to camera development especially in autofucus and ease-to-use.' Every EOS fan should own one 650 simply because of its affordable price today. As I read online, one got it at USD 6. I bought mine sold 'as it' at USD 3 plus shipping. This body was ill of 'shutter bumper sticky' with 'oil' stuff on the shutter blades. As a 'senior research scientist' (supposes to follow a protocol of doing science, sample the 'oil', analyze its contents, and come with a solution), I used my 'magic detergent' and MQ water to clean it up. Test shooting shows that my 650 works faultless. My 650 is near mint except the 'illness', a common problem in aging 650. I can not find a single scratch on the body. Wondering what this 650 had done over the past 20 years? The build quality of EOS 650 should be credited. Once it was in my hands, I know this body was solid. It is of both Japaneses design and manufacture as the camera bottom marked 'Canon Japan 1353225'.


The elder brother EOS 650 is bigger and heavier, but it performs fine in today' standard and as I expected. The little brother T2 works without any difference from current dslr except the film rewinding sound (yes, rewinding, not winding) after shutter release each time. Both model have date and non-date versions, for EOS 650, it's easier to change a film door with date/time imprinting function. My T2 is a non-date version, you can see that there is no 'date' under the 'FUNC.' list of the rear LCD screen in one of the following images. In USA, most T2 bodies are of non-date.


From 650 to T2 (including others like EOS Rebel Xs, G, Elan II, Elan IIe Elan 7ne I own and use), I come with my term EOS, Evolution Of Shooting.


Below are my images of 650 and T2 side by side. Please get your own vision on EOS in stead of my words. 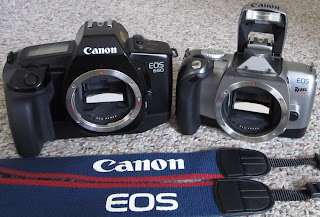 Hello? The little one says.

Let's turn around. That guy will shot us. The elder brother says.

I carry a LCD on my shoulder. The big buy adds.

Oh, mine is on my back and is bigger than yours. The little one replies. 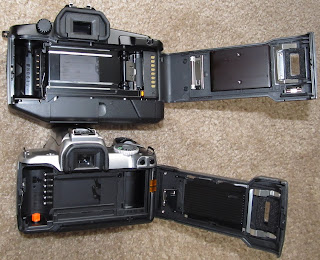 Let's wave to him. says the little one. 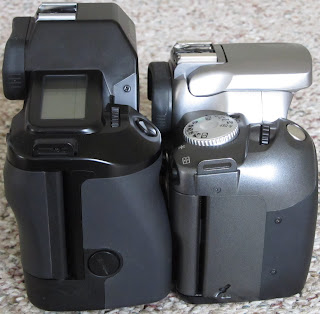 I am taller than you. The elder says. 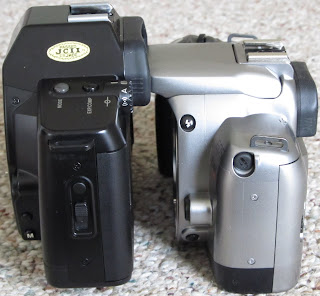 Yes, you are. The little agrees.

Oh, what else can we show him? The little brother asks.

Our batteries. Both brothers say.

Canon manufactured three different models of grips for EOS 650 and its sibling models.
If you like to see the T2 equivalents from other manufactures, visit my blog page comparing them.
Posted by The Chens at 9:35 AM