The User's Review: Revue SP Full and Half Frame 35 MM Camera, Released in 1966

Revue SP is a rebranded Konica Auto-Reflex P and Konica Autorex P , even the kit lens of SP is marked Hexanon only. 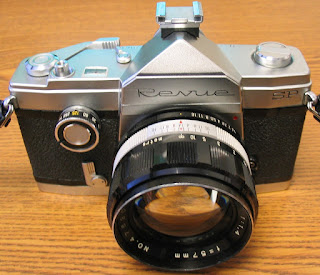 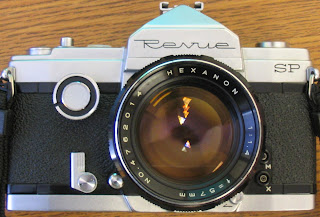 The Revue SP I have has no the dedicated slip-on light meter and case. I do not know whether the meter and case sold with SP are marked 'Revue' or not. My SP came with a front lens cap without any brand name. Don't know if it's a original one.

It's common to see a sticker on the inside surface of film door in most Konica SLR cameras. However, there  is no such sticker in my Revue SP. 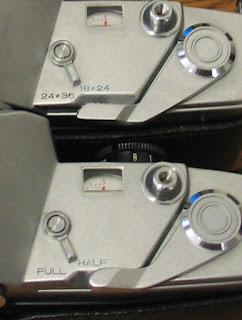 On Revue SP, the frame sizes (24x35 and 18x24) are marked by the frame switch while, on both Konica Auto-Reflex P and Autorex P, FULL and HALF are marked.

Revue SP might be one of the first cameras launched by Foto-Quelle, a photographic retailer, in western Europe.
Posted by The Chens at 11:03 AM