In early 2011, an idea popped up in my mind was to leave an image of my two little boys on a hard copy of negative film. I began to look for a used film camera and found that this kind of camera is much cheaper than I expected.

In 2011, I saw that the film cameras were fading out of our life. They had recorded our life before the digital time. On the other hand, I should record and tell about them for the future generations. Many of the old cameras carry and show the smart ideas of our previous generations. Therefore, I began to buy and trade film cameras. Most of them were 35mm film cameras and were at a couple of US dollars. Since late January to the end of 2011, I had prepared 101 review posts. To my surprise, my posts had got more than ten thousands of pageviews on www.blogger.com by the end of the year. The statistics of my posts in 2011 are shown below: 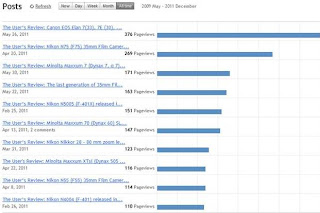 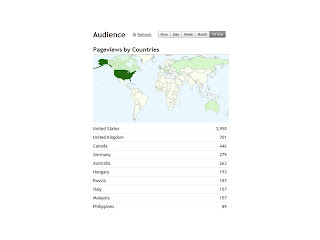 In 2011, Walmart and Sam’s Club dropped their service of film development (they still print picture from   digital media), leaving it more expensive in other stores or online. The cost of development and printing of one roll of 35mm film is about USD 10 later 2011.